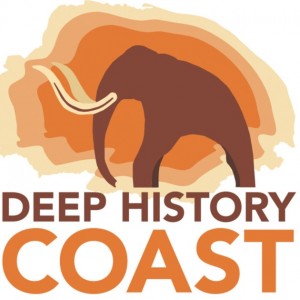 The pace of coastal erosion around north Norfolk might be a constant worry to property owners but the secrets exposed by the crumbling cliffs are about to be turned into what could become one of the county’s biggest tourism draws – the Deep History Coast.

Roll back time to an age when East Anglia was connected to the continent by a bridge of land and early ancestors of modern-day man were roaming a landscape of grassland and woodland shared by such intimidating wildlife as sabre-tooth cats and mammoths twice the size of modern African bull elephants.

A breathtaking picture of this unpredictable time is being pieced together by archaeologists as the soft cliffs give up more and more of their secrets along the fastest-receding coastline in Britain.

The most dramatic finds to date – and ones that received international coverage – have been the almost complete skeleton of a Steppe Mammoth discovered at West Runton in 1990 and 850,000 year-old footprints of a wandering family group of ancient humans exposed by the pounding waves at Happisburgh two years ago. 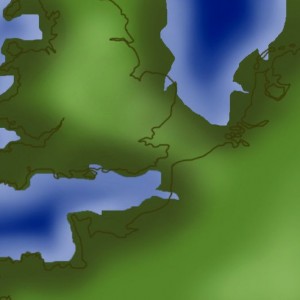 However, other smaller pieces in the scientific jigsaw – revealed as coastal erosion exposes new areas of what is known as the Cromer Forest-bed Formation – range from early flint hand axes to fossils of everything from sabre-tooth cats and rhinos to spotted hyaenas and even macaque monkeys.

Now, as the picture becomes more complete of a pine forested land with a climate – but not much else – comparable to today, work has begun on developing a tourist attraction which it is hoped could become more important than the Jurassic Coast in Dorset and East Devon.

The project is being led by curators at Norfolk Museums Service (NMS) with the help of regional tourism experts and county council staff responsible for Norfolk trails, 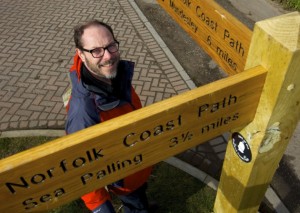 Their aim is to display the mammoth as the centrepiece of a permanent Deep History Coast exhibition in Norwich Castle Museum within five years. Complementary displays will be put on in Cromer and Great Yarmouth’s Time and Tide museums.

Meanwhile, within two to three years, it is planned to install interpretation panels, and possibly artwork, along the first Norfolk stretch of the England Coast Path from Weybourne to Sea Palling.

The project will make use of the latest virtual reality technology in developing an app that will allow visitors to hold up their mobile device on the clifftop and see an image of the ancient landscape.

Dr John Davies, chief curator at NMS, said: “The mammoth, which dates back 600,000 to 700,000 years, was discovered just at the time I arrived at Norfolk Museums Service.

“At that stage there was no evidence at all of humans being around.”

He said the story advanced a decade later when a flint hand axe was discovered at Happisburgh which, using the age of geological deposits to date it, proved that an early form of man known as Homo heidelbergensis had certainly been around in the area as long ago as 550,000 years.

An even more significant advance came in 2013 when a research project at Happisburgh led by experts from the Natural History Museum and British Museum discovered smaller flint tools proving that an earlier form of human – Homo antecessor – had been in the area more than 850,000 years ago.

However, the find that greatly magnified the potential of the Deep History Coast idea came in the same year when 850,000-year-old human footprints – the oldest found anywhere outside Africa – were discovered in sediment at Happisburgh that had been exposed by a storm.

Dr Davies said: “The footprints were only there for two weeks but the reason they are so important is that they tell you about behaviour.

“We know there were adolescents in the group and we can work out their speed and height. They were going down the coast but following a meandering path.”

While the museum experts have now finished their work at Happisburgh, research is being continued by local natural history enthusiasts, their finds being systematically recorded as part of the Cromer Forest-bed Fossil Project.

Dr Davies said: “Steve Miller, our new head of museums, was immediately keen to ensure the public was given a chance to share these fantastic discoveries and started talking to tourism people.”

Amazed at how quickly the concept of the Deep History Coast – a name invented by British Museum colleague Jill Cook – had caught on, he said: “Things are going so fast now.

“We think Norfolk is punching below its weight and this should become the Mecca for people to come to if they want to find out about the early occupation of Europe.”

The story will initially be told in a ‘Humans in Ancient Britain’ exhibition, running from June 13 to September 6, at Great Yarmouth’s Time and Tide Museum.

Dr David Waterhouse, NMS’s Curator of Natural History, said a few of the West Runton Mammoth bones are on show at Cromer Museum but the sheer size of the skeleton, largely in store at the Norfolk Collections Centre at Gressenhall, made displaying it problematic.

He said: “Our plan is to display it in the Rotunda in the middle of Norwich Castle – the only place big enough. Because the bones are so  fragile, we are looking at doing a laser scan of the skeleton and making a 3D print of the entire mammoth; it has been done before in the US.”

Dr Waterhouse said they would be seeking a large grant for the permanent exhibition, which is likely to cost several hundred thousand pounds to put on.

“I am confident it can be one of the most successful exhibitions ever staged at the Castle,” he said.

Norfolk County Council countryside manager Dr Andy Hutcheson said the first Norfolk section of the England Coast Path, which opened in December, offered the ideal way of exploring the Deep History Coast, offering wonderful views of the soft cliffs in places which had been difficult to access before.

He said: “We are looking at various funding sources, both nationally and in the EU, to develop the project. Our plans include interpretation panels along the path as well as an arts-based project to create something iconic to represent the mammoth at West Runton and the footprints at Happisburgh.”

He said: “The total amount of funding we need depends on the scale of what we do, but I believe the project deserves to be as spectacular as possible.

“Recent research has shown that a lot of people come to Norfolk for its countryside and coast but it also suggests that the county suffers in comparison with other destinations, such as Cornwall, for not having a unique offering. This can become Norfolk’s USP.”

He said his aim was to have elements of the project in place within two or three years.

Pete Waters, brand manager at Visit Norfolk, said: “Deep History Coast will provide the county with an absolutely unique tourism proposition and is a fantastic opportunity to boost an otherwise under-developed part of the Norfolk coast.

“Crucially, if done well and with good funding, it could encourage improved infrastructure and help grow year-round employment. There is no reason why this couldn’t be bigger than Jurassic Coast.

“We can genuinely say that the first tourists to Britain came to Norfolk.

“We can say that Norfolk is the cradle of British civilisation. Who would not want to walk in the footsteps of the first people to arrive on our shores?

“Put that with the West Runton Mammoth skeleton and Happisburgh hand axe, the Swiss Army Knife of its day, and these are brilliant strands to build a compelling story to attract more visitors that will resonate around the world.”

He said they had organised their first Deep History Coast press trip in February and the five national journalists on it had been convinced by the whole concept.

“Take people to the top of the Sheringham Park watch tower and explain that as little as 7000 years ago the North Sea in front of them was actually land that resembled the African Serengeti and whose jaw wouldn’t drop,” he said.

story from the edp

Walk CromerSunday, August 14th, 2022 at 9:41am
A surprising treat for walkers on the coast path, opposite the Deep History Coast information point. The Tiger that glows in the evening light. One of the Cromer Artspace life size reproductions appearing around town as part of a collaborative project with the National Gallery, London.
There will be 30 pictures in place when the exhibition opens on 2 September

Walking the Norfolk coastal path- the old stories are in the landscape. Charcoal animation made for NMM club challenge February 2017
View on Facebook

Walk CromerWednesday, July 27th, 2022 at 8:45am
A recent walk from East to West Prom, just before school holidays. Now it's very busy down there, and the seas are still quite rough!

Brancaster Staithe villagers rally round after fire.
View on Facebook

Walk CromerSunday, July 24th, 2022 at 7:29pm
Rowan Mantell reveals just some of the places in the county where you can find respite from the sun

Walk CromerTuesday, July 12th, 2022 at 7:56am
A new path for cyclists could link Cromer and Sheringham as part of wider plans to develop hundreds of miles of cycle and walking routes in Norfolk.

A new path for cyclists could link Cromer and Sheringham as part of wider plans to develop hundreds of miles of cycle and walking routes in Norfolk.
View on Facebook